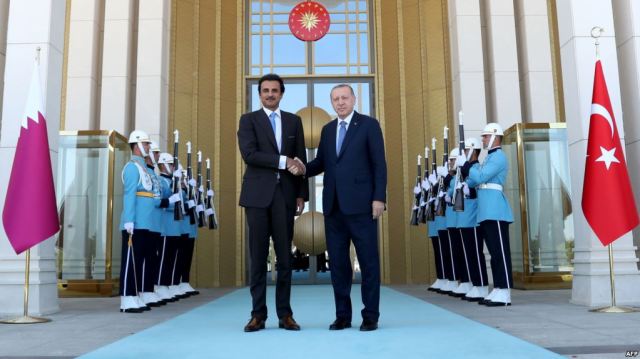 Early last July, as the Gulf crisis between Qatar and its neighbours entered its second year, the leadership in Doha projected a defiant and confident image. The presence of Turkish troops on its soil and the flood of Turkish goods to its market have helped Qatar’s confidence. However, Qatar did not expect that, only a few weeks down the line, its backer, Turkey, would be the vulnerable one in need of help.

A lot can change in the span of a few weeks. By the end of July, the Turkish lira had dropped more than 40% against the dollar. The lira crisis was compounded by the dispute between Turkey and the US over the imprisonment of the American pastor Andrew Brunson in Turkey. Brunson is accused of being a spy who attempted to overthrow the government during a 2016 coup, but to the US, Brunson is an innocent man who is being wrongfully detained. The Trump Administration imposed financial sanctions on Turkey and threatened more actions unless the pastor is released.

After an initial silence, Qatar stepped up to help Turkey. Qatar’s emir pledged $15 billion for economic projects, investments, and deposits in support of Turkey. Qatar’s and Turkey’s central banks subsequently signed a currency swap agreement to provide liquidity and support for financial stability.

Some observers were surprised by the Qatari decision to stand by Turkey, viewing the Doha’s move as a stand against US President Trump in his political dispute with Turkey over the detention of the pastor, yet such support was actually expected. The Qatari regime is an integral part of the International Brotherhood movement, who bet on Erdogan’s Turkey as a model and a patron. Islamism is now so embedded within Doha’s corridors of power that it can force the emir to step in to support his Turkish friend, even if the dispute between Qatar and its Gulf neighbours had never happened.

Nonetheless, the Qatari decision to pump billions into Turkey is simply a gamble that may prove to be reckless and harmful for Qatari interests in the long term.

Since the beginning of the Gulf crisis last year, the leadership in Doha has relied on the United States to be a patron and mediator to resolve the crisis. Doha has recruited dozens of writers to defend its regime in Washington and portray it as an obedient ally of the United States. The Turkish–American dispute broke this image of Qatar. By siding with Turkey, Qatar risks ruining its relations with the US administration. There are already signs that the Qatari move has not gone over well in DC. In an interview with Reuters a few days ago, US National Security Advisor John Boltonexpressed that the Qatari cash infusion would not help Ankara’s economy. “Well, I think what they pledged is utterly insufficient to have an impact on Turkey’s economy. It’s certainly not helpful but we’ll actually see what develops from their pledge,” he added. Moreover, Republican Senator Ted Buddvoiced his deep concerns about Qatari regional activities. He did not mention Turkey, but highlighted that Iranian banks are moving their foreign exchange operations to the Qatar National Bank. He also emphasized Qatar’s continued support of state-sponsored terrorism efforts.

The US administration may refrain from publically criticising Qatar, but the US can stifle Qatar—not only politically, but also economically—if it wants to. Qatari banks have been in a fragile position since the beginning of the Gulf crisis. Qatar’s sovereign wealth fund has recently repatriated about $20 billionto help support the country’s banks that are already stretched thin after financing the demands of the $200 billion 2022 World Cup and the ongoing Saudi Arabian-led boycott.

Second, investing in Turkey is a risky gamble:

This is not the first time Turkey has faced a severe economic crisis. In 2001, the Turkish state faced a similar crisis, but it overcame it by adopting rational fiscal and economic measures. However, the current crisis is different. It has the deep marks of a toxic mix of populism and Islamism that rendered the Turkish economy out of sync with other open-market economies.

Like other populist regimes, Erdogan’s Turkey has been obsessed with the construction boom, which was financed through unwise borrowing and led to rising debt held by Turkish banks and companies of an estimated $350 billion. Furthermore, the Turkish president’s handling of the crisis reflects his destructive Islamist doctrine with its three-fold destructive pattern:

By tying itself to such a dysfunctional economy, Qatar has done its people a total disservice. The current Turkish–American crisis poses completely different challenges for the leadership in Doha. Qatar’s billions, which usually help Doha solve any crisis it faces, are useless this time. It will neither save Turkey from its self-destructive path nor help strengthen its relations with the US leadership. Even if Qatar tried to mediate between Turkey and US, such mediation would be doomed to failure as the dispute runs much deeper than “ransom money”.

Qatar has entered the Islamist bunker without an exit strategy but with an Ottoman patron that has increasingly been a liability rather than an asset. From now on, it will be an ATM machine for a doomed project that has become increasingly disengaged from reality.

An Arabic version of this piece was published in Al-Hurra

Doctor, blogger and Commentator on Middle East issues. The only practising doctor who write in Middle Eastern politics in UK.
View all posts by nervana111 →
This entry was posted in Best Read, Qatar, Turkey and tagged Andrew Brunson, middle-east, Qatar, Trump, Turkey. Bookmark the permalink.