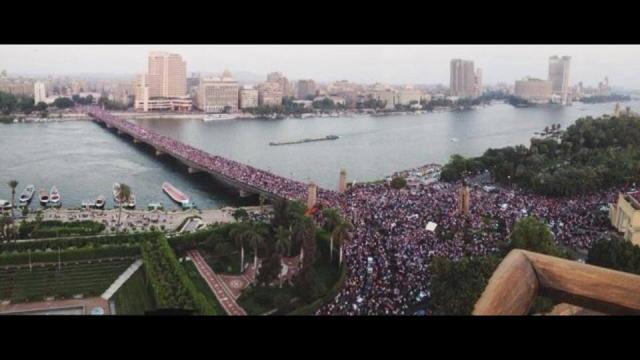 (Photo via of June 30 demonstration in Cairo via Twitter)

Millions and millions poured into the streets of Cairo and other regions of Egypt, calling for President Morsi to resign. The vast, unprecedented numbers of the June 30 demonstrations, which continued well into July 1st with unflagging fervor and tenacity, has defied expectations. The sheer magnitude of these crowds has even defied logic – after all, Morsi was democratically elected. Yet, this is not a revolution to establish democracy; it is revolution to defend an identity. Although there are several political, social, and economic factors behind June 30, the tipping point was what many in Egypt perceive as a new form of colonization by the Muslim Brotherhood; the revisionist party that considers itself the savior of Islam has embarked on a mission to change the identity of Egypt into an Islamist one.

For over 7,000 years, Egyptians have accumulated a diverse mixture of various identities – Pharoanic, Coptic, Arabic, Sunni, Shia, Mediterranean, Nubian, and Bedouin – all brought together in a big mixing pot that is called ‘Egypt’. The people have welcomed newcomers without compromising core values of tolerance and deep relation to the land, which has surprisingly been maintained within roughly the same borders for centuries. Egyptians have a long record of rejecting forced change by autocratic or colonial power; even Nasser’s Arab nationalism fell quickly after his death. Over the last year, Islamists in Egypt have assumed that winning the election was a license to change Egypt’s identity into a new Islamist one – an identity that they can’t even define or outline, and yet they’re consistently yelling at what they reject. This list is long and growing – from ballet to opera to satire.

Once elected, Morsi removed his revolutionary cloak and revealed his Islamist garments. He appointed ministers with Islamic affiliations in powerful positions, particularly in culture, education, and endowment ministries tasked to change curriculums, fighting what they perceive as unacceptable elements of Western culture, and introducing a new type of preaching in mosques. Egyptians started to hear about vigilantes, vice and virtue, halal tourism and other concepts alien to them.

Furthermore, the Brotherhood has adopted what many of their predecessors have done for generations; addressing them as “the great people of Egypt,” but at the same time behaving as if the people are ignorant children unaware of their best interests, with a deeper belief that the wider public is a backward bunch who need preachers to lead and guide.

Sheik Qaradawi’s speech on June 29, addressing the pro-Morsi crowds also mentioned an interesting verse of the Quran; “Obey God, obey the Prophet, and your own guardians.” Qaradawi summed up what many Islamists believe; the president of the country is the guardian of the nation, and should be obeyed as long as he does not commit any sins. If Morsi’s edict last year has delegitimized him politically, those views have ruined what was left of his legitimacy. Egyptians did not elect a guardian but a civil servant. The June 28 and 29 pro-Morsi rally has confirmed the fears of many Egyptians; they watched the chanting, the speeches and the attitude of Morsi’s supporters, ironically, it have cleared all doubts in the minds of many Egyptians about whether to join the protests on June 30 or not; it became clear to millions that Morsi must go simply because he does not represent Egypt, but an international Islamist’s project that dismiss others as infidels or imperfect.

The conflict in Egypt runs deeper than the issues of democracy and election. If pyramids are any inspiration, Egyptians consider their collective diverse identity as the foundational layer of their new modern state; without it, democracy and elections are meaningless exercises.  Egyptians have watched how the Iranian revolution unfolded and how the Islamists hijacked the dreams of many ordinary Iranians who yearned for freedom and equality. They also watched how Hamas won elections in Gaza, only to impose harsh Islamic rule under the pretext of fighting the occupation. Egyptians have realized that unless they fortify their January 2011 revolution with another wave of revolts, they may end up with decades of Islamism that will be difficult to shake or undo.

No one has understood the war of identities better than the Egyptian army; by throwing Egyptian flags from their helicopters towards the protestors in Tahrir Square, and carefully phrasing a statement, full of sentimental and patriotic hints, the Supreme Council of Armed Forces (SCAF) has struck the right cord, and appeal to the jubilant crowds. However, it is wrong to assume that Egyptians have forgotten the mismanagement of the post-Mubarak transition period by the SCAF, their virginity tests, and military trials. The people do not want a new autocracy or a military force that exacerbates an already polarized political scene.  They still want their politicians to rise to the challenge. Any assumption that the protestors are just a mob that worships autocracy and are easily manipulated by SCAF or ex-regime elements, and any attempts to compare them with Turkey or Algeria, is wrong and based on a failure to understand the Egyptian psyche, and the background events.

In 2011, Egyptians promised to return to Tahrir if their politicians let them down, and they fulfilled that promise ___ and in style_ ___ on June 30. I have no doubt that they will rise again, and again, if the army or anyone else dares to undermine them or crash their dream. It is sad to see some Egyptians pundits join Western analysts, and underestimate their political awareness. Make no mistake those crowds will turn against SCAF if they dare to exploit them.

That is why SCAF must choose their next steps carefully as well. Pleasing the public in Tahrir should not translate into targeting the Muslim Brotherhood or arresting their leaders, which is the group’s main fear. It is time for a fresh inclusive start that heals old divisions. Egyptians are willing to accommodate the Islamists; they just reject their domination. Any future road map should be based on a no-winner-no-loser formula; that will lay the foundation of a concrete democracy that is based on pluralism, and reconciliation. That is what worked in South Africa and must be implemented in Egypt. On the other hand, Islamists should swallow some humble pie, and embrace the other side of Egypt that they have consistently rejected. They should use SCAF’s ultimatum as a chance to forge a deal that will secure their rights as partners of democracy and guarantee a graceful exit for Morsi. Violence may temporarily ruin Egypt, but it would destroy the Islamic project forever.

The battle for the soul of Egypt is crucial to the rest of the Middle East as it is essentially the conflict between Islam and Islamism; democracy and autocracy will either settle the score forever or continue to rage for generations to come.

Doctor, blogger and Commentator on Middle East issues. The only practising doctor who write in Middle Eastern politics in UK.
View all posts by nervana111 →
This entry was posted in Egypt, June30 and tagged Coup, Egypt, Islamism, June30, Morsi, Morsy, Muslim Brotherhood, SCAF. Bookmark the permalink.

19 Responses to It’s the Identity, Stupid