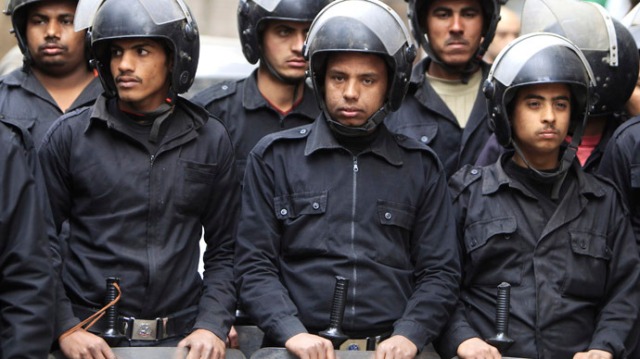 This week, I would like to introduce you to a new Egyptian term: ‘Bazramit,’ which mean a collection of clashing ingredients in a one tasteless recipe. As I have already have written about the military and the opposition parties in separate pieces, I would like to devote this week’s thoughts to another key ingredient in Egypt’s unique Bazramit: The Police and the security apparatus.

There are evolving, volatile dynamics inside Egypt’s police and the security apparatus. On one hand, the clashes between the police and protestors continued throughout the week; on the other hand, there is an internal struggle between police officers and the Muslim Brotherhood-appointed Interior Minister. The strike of police officers is a unique development in the history of Egypt.

The collective outcome is the inevitable collapse of law and order with businessmen (or what is left of them) and the general public resorting to paying protection money (usually to thugs and gangs) to defend their private properties.

The Islamists’ solution came in the form of calling for the formation of “popular committees” to maintain law and order in the absence of police forces. They cite the 28th of January, 2011, as a previous successful example of this experience. It is true that Egyptians stepped in to fill the security vacuum when ex-Interior Minister Habib al-Adly withdrew the police from the streets during the 2011 revolution; however, it is crucial to understand that it was a very short-term situation that only lasted a few days, and is impossible to reenact now in a society divided and extremely polarized. It will only lead to rough justice that can easily compound the anarchy and result in a bloodbath.

It is worth noting that the violence in Port Said has eased off, despite high tension following Saturday’s court verdict after the army’s quiet take-over of the city from the police. This calm is in stark difference to the on-going violence in Cairo, where members of football fans (Ultras) are still clashing with the police. Also it is crucial to highlight that the army’s control of Port Said happened without a formal announcement from the President’s office, an event which raised the question of whether the Ministry of Defense has acted alone or in coordination with President Morsi.

The story of Eric Trager (Fellow in the Washington Institute) and the Muslim Brotherhood leader Beltagy, about his possible role in restructuring the Interior Ministry (covered here by Zeinobia ), has attracted a lot of attention in Egypt. Beltagy accused Trager of twisting his words but Trager calmly confronted him on the Egyptian TV Channel ONTV, where Beltagy behaved in a very unprofessional manner, even piling on some racist hints. At the end of the saga, many in Egypt were convinced that Beltagy did not speak the truth and Eric Trager gained more Egyptian followers on Twitter.

A few points I may add to the story:

Reading through suggested plots and rumors can also shed some light on the situation. There are two postulated scenarios:

Scenario A: The Muslim Brotherhood has been encouraging the chaos to replace Mubarak’s police force with their own “militias.” In this scenario, there is the suggestion that the Brotherhood views chaos as an opportunity for acquisition of lands, buildings, hotels and factories at rock bottom prices. Many frightened business owners cannot afford paying ransom and some of them may give up and desperately try to sell (it is already happening). In addition, the police strike can provide the Brotherhood with the opportunity to dismiss all police cadres that they view as non-compliant or that have loyalties to the ex-regime.

Scenario B: this scenario is basically the opposite of scenario A;  the ex-regime, along some opposition figures and outside players, are supporting anarchists to induce chaos that will ultimately leave the army with no choice but to return back to politics and force Morsi out of power.

All these scenarios are illogical; Egyptians’ obsession with creative chaos stems from their faith in a Supreme Being. They tend to reject the concept of random chaos and see it as illogical. For them, someone, somewhere must be pulling the strings, and of course that “someone” must be from their perspective enemy; no wonder their imagination goes wild.

Interestingly, those in power indirectly admit that they are not in control, while the outsiders refuse to believe the weakness and impotence of their leaders. Moreover, all have failed to appreciate how Mubarak’s Egypt was weak and how his security apparatus was the main pillar that kept it functioning.

Police reform is a must, but timing and methods and professionalism are detrimental during such a crucial procedure in a country on the verge of chaos. The myopic assumption that simple replacement of “their guys with ours” as the solution will only undermine Egypt’s security and create another “torture machine” under new leadership. Personally, I doubt that reform can and will happen anytime soon; I also doubt it will be able to save the country from its current havoc.

Meanwhile, watch this excellent coverage by Ian Lee (‪@ianinegypt), who reports on the food crisis in Egypt. I hope it provides a rude wake-up call to those in power that one day they may found themselves ruling a pile of explosive rubble. To watch click here.

Doctor, blogger and Commentator on Middle East issues. The only practising doctor who write in Middle Eastern politics in UK.
View all posts by nervana111 →
This entry was posted in Diary of Aak, Egypt and tagged Arab Spring, Egypt, Egyptian police, Kerry, middle-east, Morsi, politics. Bookmark the permalink.