The Military Cannot Save Egypt 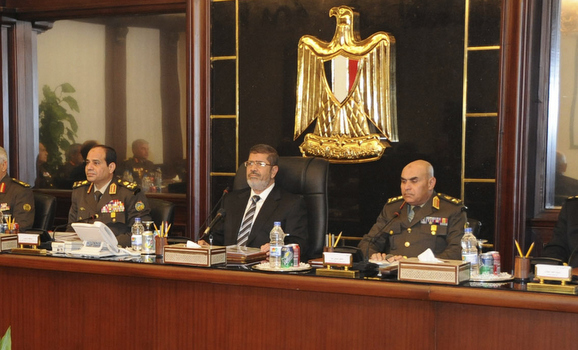 This piece is initially published in Al-Monitor, I hope it can open the debate about the potential army rule in the current crisis in Egypt.

The political news from Egypt has been dominated by reports of tensions between the powerful military and the country’s Islamist leaders, with news recently leaking that the Supreme Council of Military Forces (SCAF) has been meeting without President Mohammed Morsi to discuss the ongoing political crisis. Cairo is rife with rumors, speculation, and endless debate among the public as well as the political elite about how the military will react to the current turmoil, particularly if the situation escalates and results in more uncontrolled violence and chaos. It seems that many are considering “some sort of intervention” to be almost inevitable at some stage in the future.

Since the election of President Morsi and his surprise firing of Defense Minister Husain Tantawi, the military, with its new leader, Gen. Abdel Fattah al-Sissi, has adopted a well-crafted policy of watching closely from a distance and inserting itself only when deemed absolutely necessary. Al-Sissi, who was initially considered to be the Muslim Brotherhood’s man in the army, has proven to be a man who speaks his mind. He is endorsed by his soldiers and is not shy about vetoing ideas he perceives as inappropriate or dangerous to Egypt’s national interest (at least from his perspective). The ministerial decree turning Egypt’s border with Israel and the Gaza Strip into a five-kilometer-deep closed military zone and flooding the Gaza smuggling tunnels are just two examples.

So what’s next? What if uncontrolled violence erupts? Will the army remain neutral? The options available to the army are not as numerous as many assume. Each has its own risks and dangers and a good chance of failing. To continue reading click here.

Doctor, blogger and Commentator on Middle East issues. The only practising doctor who write in Middle Eastern politics in UK.
View all posts by nervana111 →
This entry was posted in Egypt and tagged Egypt, Egyptian Army, Morsi, Muslim Brotherhood, politics. Bookmark the permalink.

2 Responses to The Military Cannot Save Egypt