Here is an English version of my latest for Al-Hurra 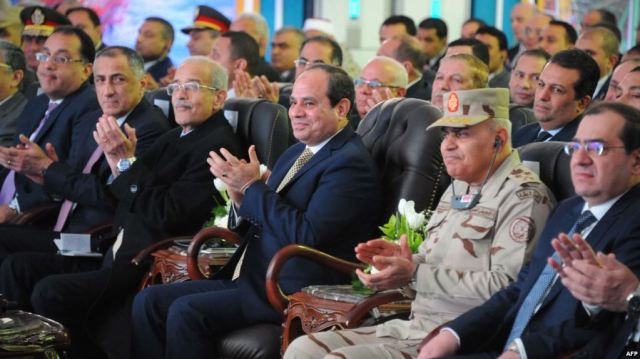 “I am not a politician, someone who just talks (beta3-kalam).”

Perhaps the most telling part of Sisi’s speech at the inauguration of Egypt’s Zohr gas field last month was the fact that comments such as these were not a veiled threat to opposition stakeholders as many news reports highlighted, but rather a reflection of Sisi’s vision of himself and his vision for Egypt.

When many of Egypt’s political figures, including ex-army Chief of Staff Sami Anan, ex-top auditor Hisham Geneina, and ex-presidential candidate Aboul Fetouh were arrested, many interpreted these arrests as a sign of the Egyptian president hunting down his opponents. But their interpretation is not necessarily accurate. None of those names was a serious threat to the Egyptian president. The problem runs much deeper. Egypt’s strongman is not a politician; he sees himself as state builder, and he views Egypt’s overall political scene as detrimental to his goal.

As Samuel Tadros and Eric Brown wrote: “The president who emerged from the barracks is thus averse not only to democracy, as some suggest, but to the very practice of politics, as he disdains negotiations and compromise, cutting deals, and developing a program.”

President Sisi is simply not a man of shades; he would rather endorse black than flirt with grey. He regards the notion of semi-authoritarianism, as espoused by Sadat and Mubarak, as a sign of political mediocrity, of governance heading for failure. In contrast, his aim is to build a new army-based authoritarian state, enriched with flexible capitalist economic policies, but with completely frozen politics.

Such a model could be based on China’s illiberal capitalism or, more intriguingly, on Antonio de Oliviera Salazar’s conservative corporate authoritarianism for Portugal. As Maged Atiya aptly mentioned on Twitter, a course on political and economic development in the Egyptian military college now features admiration for Salazar.

But regardless of which model the Egyptian president favours, a more pressing question needs to be discussed. Can the president succeed in freezing politics in Egypt and for how long?

The concept of an army-dependent state is not new to Egypt. Arguably, that is how modern Egypt was born during Mohamed Ali’s tenure and continued until the British forces defeated its army in 1881. It was also Nasser’s Egypt until the 1967 defeat. Both periods are viewed with a heavy dose of positive nostalgia among Egyptians. Re-enacting such a strong state appeals to a wide section of Egyptian society who may not be fans of Sisi, but at least understand his dream.

Moreover, President Sisi, as he indirectly hinted in his speech, regards his political opponents as a mediocre bunch of talkers, whose bark is worse than their bite. Sisi’s opponents are Islamists blinded by their desire for trans-national ideology who are inherently hostile to individual states. Or they are fragmented non-Islamists groups with an “anyone but Sisi” mentality, which many Egyptians see as a template for mob rule, not for a flourishing democracy.

Nonetheless, it is highly unlikely that freezing the political scene will last in Egypt for many reasons:

First: An army-dependent state will always be vulnerable to the outcome of the military adventures of its leadership. As mentioned earlier, both Mohamed Ali and Nasser suffered devastating military defeats with colossal negative impacts on Egypt’s political life. Moreover, Egypt under Sisi faces a multitude of challenges neither Mohamed Ali nor Nasser faced. Although Sisi has no desire for any military combat he cannot afford, the water crisis with Ethiopia and the dispute over the Mediterranean gas field could easily flare into military confrontations, with potential negative impacts.

Second, a successful autocracy may not need public consent, but it does depend significantly on public trust. Such trust can be easily undermined amidst a thriving climate in Egypt. Crushing opponents has created a climate that is full of disinformation, gossip, and groundless speculation. For example, the arrest of the army’s ex-Chief of Staff, Sami Anan, after he announced his intention to run for presidency was interpreted as a sign of mutiny between top army leaders. Such groundless speculation, albeit untrue, is enough to plant the seeds of doubt among wary Egyptians.

Third, The Egyptian society is different than Portugal during Salazar’s era. It is true that low-simmer conservative social Islamism is thriving in Egypt, but it is a double-edged sword for the regime. On the one hand, a religiously rigid, dominant society is more tolerant toward autocracy; but on the other hand, most business-savvy Egyptians are not necessarily followers of Islamism. They aspire towards a more socially liberal society. Salazar’s economic model may appeal to many people in Egypt, but his socially conservative model won’t. Such a contradiction may create problems for the regime and force it to loosen its authoritarian grip.

Ahead of the election, the Egyptian president succeeded in muting politics in Egypt, and his quest for a politics-free capitalist authoritarian state may briefly succeed. Nonetheless, sooner or later, the Egyptian president will realize he cannot afford to freeze politics forever, as he may stumble across similar challenges that confronted Sadat and Mubarak before him.

Doctor, blogger and Commentator on Middle East issues. The only practising doctor who write in Middle Eastern politics in UK.
View all posts by nervana111 →
This entry was posted in Diary of Aak, Egypt and tagged Egypt, middle-east, Salazar, Sisi. Bookmark the permalink.

3 Responses to Can President Sisi freeze politics in Egypt?