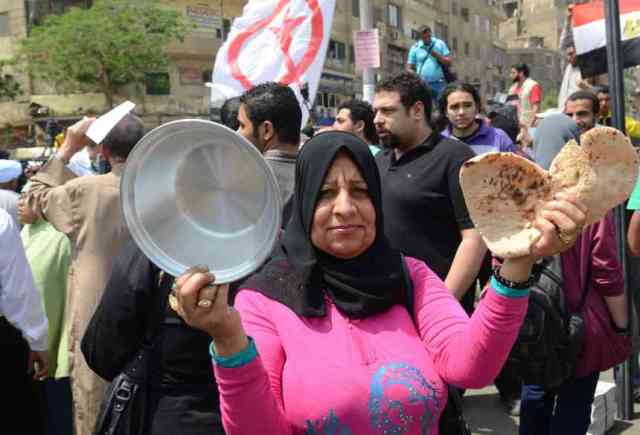 (Photo: May Day protest in Cairo, via Daily News Egypt)

As a former engineer, Morsi is undoubtedly aware of elasticity, a term in physics that describes the continuum mechanics of bodies that deform reversibly under stress. In fact, it seems that he has decided to utilize this approach ____ rather unsuccessfully____ as a part of his new political maneuvers to outgun his opponents.

A day before Labor Day (a national holiday in Egypt and a legacy of socialist Nasserism), President Morsi spoke to workers at a new steel plant in Helwan. In his address, he emphasized the importance of workers in bolstering the Egyptian economy. “It is essential that we produce our own food and weapons, and the Egyptian worker is the foundation of this production,” said the president. “You are all true partners in achieving industrial and economic development.”

It is hard to take president Morsi’s words seriously when the reality is completely different. At least 4,500 factories have been shut down since Jan 2011, with hundreds-of-thousands of workers laid off. According to a local media report, 23 were shut down just last month.

The only explanation would be in the motive, as Morsi is trying to play an Islamist Nasser in an effort to strip Sabbahi of his most powerful tool, the socialist rhetoric that appeals to a wide selection of Egyptians. Egyptians feeling squeezed by the deteriorating economy has helped Sabbahi to earn a third position in the presidential election, and continued to feed his popularity under Morsi’s rule.

It is worth mentioning, that while playing Nasser, Morsi has opted to adopt other Nasser tactics, including arrests of activists. Movements by 6th of April and other groups have recorded many arrests and disappearances of their cadres. In addition, there is a clampdown against the Black Bloc group, which recently became an obsession of the Islamists. I have yet to see any interview by an Islamist that doesn’t push the Black Bloc into the conversation. The mysterious underground organization has started to get under the Islamists’ skin, possibly because it is remarkably similar in its underground activities.

Following months of demonizing the Egyptian Coptic billionare Sawiris and his family, a well-known critic of Morsi and his Muslim Brotherhood, and accusing him of tax evasion, Sawaris was greeted at Cairo airport by an envoy of the Islamist president who presented him with flowers. Sawiris was accused of everything from hunting down media to evading taxes. Last March, Egypt’s general prosecutor placed the country’s wealthiest man, Onsi Sawiris and his son Nassef on a no-fly list, sending the main stock index tumbling by 2.3%—the worst drop in a month.

I agree with the Big Pharaoh, Sawiris who was the major financier behind the Egypt Bloc, the loose coalition of liberal parties that ran against the Islamists during the last parliament elections, was the target of the whole ordeal that his family had to endure, and the recent tax deal. The return of Sawiris could be part of an unwritten understanding with Sawiris to stay away from politics, but I doubt that he will relent. Sawiris may stay away temporarily, but not over the long term.

‪Al-Jarida, the Kuwaiti newspaper, published a report Saturday saying that Iran has been exerting pressure on the Egyptian government to renew relations with Al-Assad’s regime, which led “to the return of the Egyptian acting ambassador” to Damascus. The reports coincide with leaks that the Muslim Brotherhood leadership has decided to resume diplomatic ties with Damascus. This was later denied by Egypt’s Ministry of Foreign Affairs, but read between the lines and you will see elastic politics in full play. “When Egypt withdrew Ambassador Shawqi Ismail (in February 2012) from Damascus, the acting ambassador (Alaa Abdel-Aziz) remained in place,” Nazih El-Naggary, deputy spokesperson at the ministry, told Ahram Online. In other words, Egypt implemented a symbolic act, but kept the door semi-open so as not to upset the Iranians. It is worth mentioning that last month, Syrian opposition sources said Egypt refused to acknowledge an opposition-issued passport carried by an injured FSA soldier arriving for treatment.

Political elasticity will not help Morsi much, like in physics, the object will sooner or later return to its original shape; Morsi will revert to his old style. The unharmonious contradictory mix of borrowing a page from Nasser and bribing his opponent like a Mubarak will not work, and can be counter-productive. Other Islamists parties, particularly the Nour party will use it as a weapon in the next parliamentary election. They will paint themselves as straight-trustworthy Islamists, unlike the “hypocritical” Brotherhood.

Amidst the debate about religious freedom in Egypt, many Egyptians seem to lack basic knowledge about basic Coptic heritage and culture, which mostly stems from old pharonic traditions. Ignorance is the basic fuel of sectarianism; it empowers the voices of hatred, breeds suspicion and eventually enriches social divisions. Coptic Easter is one example. Many in Egypt celebrate Easter Monday as “spring day, Sham el-Naseem,” an ancient feast, as old as the pharaohs. Yet many Muslims also celebrated it without making any link to Copts. This is a legacy of years of systematic neglect of Coptic culture and traditions by the Egyptian leadership from Sadat until now. Teaching religious study and Coptic history is a must if Egypt is serious in eradicating sectarianism. It is highly unlikely it will happen under an Islamist leadership that directly, and indirectly fans the flame of sectarianism, and uses it as tool to fight opponents.

Doctor, blogger and Commentator on Middle East issues. The only practising doctor who write in Middle Eastern politics in UK.
View all posts by nervana111 →
This entry was posted in Diary of Aak, Egypt and tagged #Syria, Egypt, middle-east, Morsi, Muslim Brotherhood, politics, Sabbahi. Bookmark the permalink.