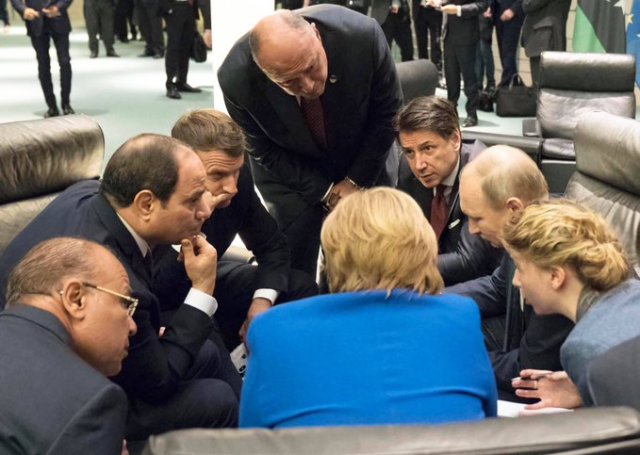 Met with President Sisi today and addressed the pointless and tragic death of detained U.S. citizen Moustafa Kassem in Egypt. On #Libya, President Sisi and I agreed on the urgent need for a return to a @UN-facilitated political process and a ceasefire. pic.twitter.com/xhhRxQhjwM

Now in Washington, DC… Foreign Minister #Sameh_Shoukry participates in the US-held meeting for Egypt, Ethiopia and Sudan on the #GERD, with the presence of the #World_Bank.@UStreasury @WorldBank

#BREAKING: Minutes ago, #Egypt's Ministry of Defense Released official video of exercise #Qader2020 which was hold by #Egyptian Armed Forces as a show of force & as a warning to #Turkey in-order to not start its military intervention in #Libya. pic.twitter.com/VQPq6dBNHc

#Libya This is the holdup for tomorrow's Libya peace talks in Berlin. Turkey and Libya's Tripoli government have declared control of two sections of the Med for gas exploration and to block a proposed pipeline by Greece/Cyprus/Israel/Egypt to move gas to EU from East Med. pic.twitter.com/xPPDn4HLgo

This is the defense minister that wants to invade Libya clearly dosnt know where it is
Turkish Minister of Defense: #Libya is our neighbor by sea,not a neighbor of #Egypt .
Somebody please give this guy a map.
Whom teaches geography in #turkey? pic.twitter.com/9RynqEtfyF

Energy is a promising source of cooperation for our partners in the E. Mediterranean, which is a fulcrum of US-Russian competition. Cooperation among Israel, Egypt, Cyprus & Greece, facilitated by U.S. companies, bolsters regional security & US interests. https://t.co/UwtZzJTEDv

Turkey’s Minister of Defence: “Libya is our neighbour by sea, not a neighbour of Egypt. It is illegitimate to question why our forces are there.“ @RTarabic

🇪🇬🇪🇹🇸🇩This is how civilized Countries act. Is there an international row? Agreement is the key! Egypt, Ethiopia, Sudan, reach an agreement on the Nile Rive mega dam. Well done! https://t.co/pCvOKoR3w2

The military base opened today in #Egypt is almost the size of #Qatar. pic.twitter.com/pzTe6f0ssf

An American citizen was wrongfully accused & unfairly jailed by the government of #Egypt.

Now he is dead.

Completely outrageous that this happened at the hands of a government that is supposed to be a partner. https://t.co/I0IXPMdsxh

In Egypt today the medical community mourns young doctors, -all women-who had a minibus accident that killed several and badly injured more while on their way from Minya in Upper Egypt to Cairo for a training course,we are all devastated.

At a press conference this morning on Capitol Hill about the death of US citizen Mustafa Kassem in Egyptian custody, the idea of Magnitsky sanctions and visa bans against those responsible for his death are being brought up by @RepMcGovern, @ChrisVanHollen, and others.

Doctor, blogger and Commentator on Middle East issues. The only practising doctor who write in Middle Eastern politics in UK.
View all posts by nervana111 →
This entry was posted in Diary of Aak, Egypt and tagged Berlin Conference, Berlin Summit, Egypt, Ethiopia, GERD, Libya, Sisi. Bookmark the permalink.