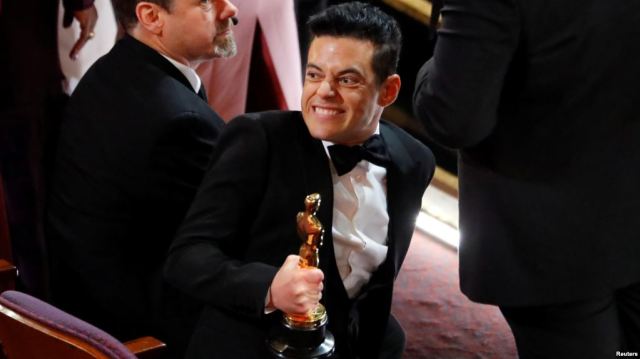 Ghosal, who described Mercury as “unabashedly, flamboyantly queer,” cited a quote from Malek’s acceptance speechin which he said, “We made a film about a gay man, an immigrant, who lived his life just unapologetically himself.” To support her claim that Egypt was being hypocritical, Ghosal said that if the Egyptian government and its apologists “want to own a piece” of Malek’s Bohemian Rhapsody triumph, they should “own up to the facts” about the appalling treatment of homosexuals in Egypt. In her view, Rami Malek “gave life, joyfully, to a queer icon,” but Egypt, under President Sisi, would not allow either Freddie Mercury to thrive on its soil, or a Malek to celebrate him.

Even if we acknowledge the writer’s view that Mercury’s sexual orientation was the core part of the film, the researcher’s argument is still deeply flawed.

Firstly, the celebration of a young man of Egyptian origin, who was passionately proud of his Egyptain roots, is not hypocritical and has nothing to do with homosexuality. Secondly, the idea that the Egyptian government has no right to celebrate Rami Malek’s Oscar, unless it recognizes homosexuality is frankly absurd. By that logic, the Egyptian government must recognise prostitution, sex outside marriage, and all other taboos in Muslim societies in order to celebrate any film that addresses those issues with any degree of positivity.

Perhaps the researcher did not follow the history of Egyptian cinema. For over a century, Egyptian film-makers have challenged taboos and produced daring movies about various controversial topics, including homosexuality. Films such as “Cat on Fire” and “The Yacobian Building” bluntly deal with homosexuality, and despite creating an uproar and controversy, both were eventually approved by the governent censorship authority. Furthermore, film critics and the vast majority of Egyptian audiences praised both Nour El Sherif, the main actor in Cat on Fire, and Khaled El Sawi for playing the daring roles of gay men. Along with homosexuality, Egyptian cinema has addressed other social taboos, such as sex workers, and even portrayed them as victims.

In fact, The Yacobian Building movie was approved in 2006 during Mubarak’s era, despite several crackdown cases against homosexuals throughout his tenure. In 2001, 52 gay Egyptian men went on trial for offending religion and practising debauchery. In 2004, HRW reported how a 17-year-old private university student received a 17-year sentence in prison for posting a personal profile on a gay dating site.

Moreover, it is no surprise that the current Egyptian Immigration Ministry celebrated Rami Malek’s Oscar and tweeted a quote from his Oscar acceptance speech. Since the current Immigration and Expatriates Affairs Minister, Nabila Makram, started her term as one of eight female ministers in the Egyptian government, she has taken an open approach to Egyptian expats, irrespective of their different moral values. Therefore, celebrating Rami Malek is consistent with her own style, regardless of the regime’s treatment of homosexuals.

It is indeed true that the current government has increased the crackdown on homosexuals. However, authoritarianism alone is not the main reason behind Egypt’s anti-gay crackdown. According to a 2013 survey by the Pew Research Center, 95% of Egyptians believe society should not accept homosexuality. This simple fact is clearly inconvenient for HRW to acknowledge.

This anti-gay hysteria can be traced to the rise of social Islamism since the 1970s. It has left its mark on the whole society and blurred the differences between religious sins and illegal crimes. Regrettably, successive Egyptian regimes have tried to match Islamist movement regression by cracking down on unpopular groups, such as gays, to cater for its increasingly conservative subjects.

Such a policy , from the current Egyptian leadership, is shortsighted, to say the least, especially from the current leadership that consider fighting radicalism its top priority. Homosexuals are the least dangerous group to the Egyptian state. They may be guilty in the eyes of religion, but they have not conspired against Egypt or terrorized Egyptians as those radicals who claim top masculinity and honor have done.

To trace the link between social Islamism and anti-gay attitudes, one should look beyond Egypt. Malaysia, supposedly a democratic country with an increasingly Islamist tune, does not recognize the LGBT community and has denied the existence of gay people in the country. Moreover, in Britain, Muslim families have withdrawn 600 children from their schools, claiming their kids were being brainwashed over gay lifestyles. Those families are neither Egyptians nor Sisi supporters. I doubt, however, that HRW will accuse those families of hypocrisy for voluntarily living in an open liberal society, while rejecting its values of equality and diversity.

In its desperate attempts to control the narratives and pinpoint authoritarianism as the mother of ills, HRW has dragged Rami Malek’s Oscar victory into a deeply complex social morass. HRW has every right to oppose the appalling persecution of homosexuals in Egypt, but has no right to spin Egypt’s sincere delight for Rami Malek as “hypocrisy.” There are many reasons to criticise the Egyptian regime, but celebrating Rami Malek is not one of them. The same organisation, and probably the same researcher, would curse Egypt if its leadership rejected Rami Malek and his Oscar film. Such dualism from a supposedly neutral organisation is the ultimate example of hypocrisy.

An Arabic version of this article was published in Al-Hurra

Doctor, blogger and Commentator on Middle East issues. The only practising doctor who write in Middle Eastern politics in UK.
View all posts by nervana111 →
This entry was posted in Best Read, Diary of Aak, Egypt and tagged Egypt, Homosexuality, LGBT, Nabila Makram, Oscar, Rami Malek, Sisi. Bookmark the permalink.