The myth of “the deal of the century”

Here is an English version of my latest Arabic piece in Al-Hurra on how imaginative plots have been weaponised and used to demonise certain Arab countries, particularly Saudi Arabia, United Arab Emirates, and Egypt. 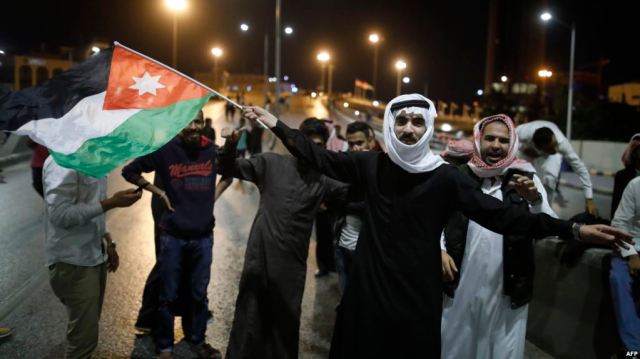 Photo from latest protests in Jordan- via Al-Hurra

In July 2017, columnist Abdul Al-Hamid Al-Majjali wrote in the Jordanian daily Al-Dustourthat the Arabs believe in conspiracymore than any other people in the world. He highlighted how many in the Arab world see events as foreign plots hatched in dark chambers in the West. Almost a year later, protests erupted in Jordan against IMF-backed austerity measures. Like all crises in the Arab world, Jordan’s protests attracted another conspiracy theory –“the deal of the century.” But unlike previous conspiracies, the new one does not only blame the West, but also certain Arab countries, mainly Saudi Arabia and its allies. Precisely why, is dangerous and destructive.

The term “deal of the century” was circulated more than a year ago, when American President Donald Trump expressed his desire to achieve a comprehensive resolution to the Israeli-Palestinian conflict. Trump’s good relationship with Israel’s government and with key Arab states have raised hopes of reviving 2002’s Arab Peace Initiativeof recognising Israel in return for a Palestinian State with borders such as those that existed before the 1967 war.

Trump’s interest has ignited a vociferous debate about whether such a deal is feasible, even in the absence of any specific details about Trump’s initiative, specifically when he met the Palestinian president in Bethlehem in May 2017.

But the American president did not need to say anything; many Arabs have decided to articulate their own versions of the “deal of the century.” Over the past 12 months, I have heard head-spinning scenarios being projected around this elusive deal, on both social and mainstream media. Ordinary Arabs, revolutionary activists, and even analysts and journalists have postulated about the details of such a dubious deal. Outlandish scenarios, such as Jordan as the new Palestine or Sinai as an extension of Gaza, were circulated.

The latest wave of protests in Jordan came as a gift to advocates of this alleged plot. “They want to destroy Jordan, because it refused to fulfil their deal of the century,” was a mantra that became almost synonymous with news of the protests in the streets of Jordanian cities. What has been consistent in all the various scenarios is the implication of certain Arab countries, particularly Saudi Arabia, the UAE, and Egyptin such plots, and the portrayal of those states as traitors to the Palestinian cause.

Traditional enemies, such as America and Israel, and all the valid reasons that Al-Majjali rightly explained, are not the sole explanations. After decades of enshrining conspiracies in the Arab psyche, imaginative plots have been weaponised and used to demonise certain Arab countries. Welcome to stage II of the conspiracy, in which Arabs are the neo-traitors.

Unlike other conspiracies, the “deal of the century” is gaining traction and appeal among many, not just because of the century-old mistrust of Western motives or the Trump administration’s warm relations with Israel, but because it serves the interests of certain countries and alliances in the region.

Two events that indirectly helped rumours of the “deal of the century” plot flourish were the Qatar crisis and the US withdrawal from the Iran deal. In March 2002, there was hardly any criticism against the late Saudi King Abdullah when he unveiled the Arab Peace Initiative. But that was before the Arab Spring, and Saudi Arabia was almost immune from criticism.

In the post-Arab Spring era, however, the political map of the region has been re-drawn. Three camps have emerged, two Islamists, the Iranian camp and the Qatari-Muslim Brotherhood ones; a new Saudi-quartet coalition that divorced Islamism and is seen as more pragmatic towards Israel.  The so-called “deal of the century” has become a convenient tool in the hands of those whose mission it is to discredit the Saudi camp. In the alleged plot, Egypt’s buffer zone in North Sinai is portrayed, not as a counter-terrorism measure as Egypt has asserted, but as a preparation for the future relocation of Palestinians. Jordan’s dwindling aid is also portrayed as a deliberate tactic, particularly by Saudi Arabia and the UAE, allegedly aimed to help Israel to create Palestine in Jordan, instead of the West Bank.

Here in Al-Hurra, Joyce Karam explained the reality in Jordan and how the protests had nothing to do with any foreign conspiracy or deal. I also wrote before countering the myth of Sisi’s Sinai proposal  But how can logic win when religion and national identiy are used to boost certain camps in the region?

Advocates of the ‘deal of the century” myth exploits two conflicting attitudes in the Middl East: The first is a dogmatic one that suggests Palestinians will be the ultimate losers from any peace deal with Israel. The second is a pragmatic attitude, driven by the fear that the status quo will ultimately harm the Palestinian cause, and that a deal with Israel is needed.

People are entitled to disagree with pragmatism, but they have no right to blur the differences between pragmatism and betrayal.