Iran Deal and the Empowerment of Islamism

Here is an English version of my latest piece in Al-Hurra on Iran nuclear deal, which I have rejected since 2015.

You can read the Arabic version here 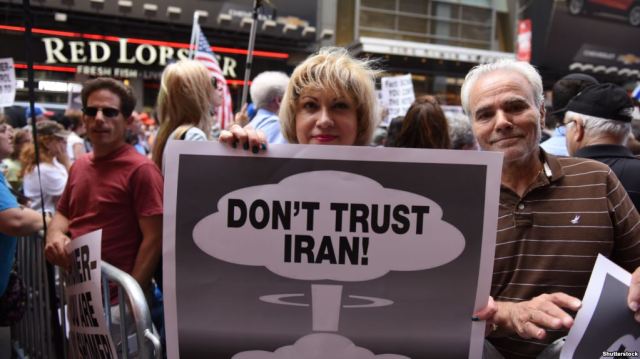 “The Iran Deal was one of the worst and most one-sided transactions the United States has ever entered into.”  With those tough words, American President Donald Trump terminatedthe United States’ participation in the 2015 Joint Comprehensive Plan of Action(JCPOA) regarding Iran’s nuclear program. His decision has created a global uproar among supporters of the deal, and some applause from others who oppose it. Three years ago, I wrote against the Iran nuclear deal. Today, I still stand against it.

The Iran nuclear deal has never been just about that country’s nuclear ambitions. For the Iranian Mullahs, the deal has been a tool to clinch an acknowledgment, albeit indirectly, from the West, that their anti-modernity model is viable and successful. In 2015, I wrote that any hopes Iran would abandon its “path of violence and rigid ideology” after forging a deal with Western powers could turn out to be no more than wishful thinking.  Three years later, Iran’s toxic rule in the Syrian civil war, its backing of the Houthis in Yemen, and the domination of its proxy, Hezbollah, in Lebanon, are all undeniable facts. My fears have proven to be true.

However, it is alarming and disheartening to see that many liberal Westerners supported the deal, in spite of the damage Iranian rule has caused in many Middle Eastern countries. Worse still, these countries are still defending Iran.

A few weeks ago, French President Emmanuel Macron dazzled his audience in the American Congress by defending the liberal order. “We have encountered countless rendezvous with death, because we have this constant attachment to freedom and democracy,”the French President said.  He added: “Together with our international allies and partners, we are facing inequalities created by globalization, threats to the planet, our common good, attacks on democracies through the rise of illiberalism, and the destabilization of our international community by new powers and criminal states.”

However, in the same speech the French president defended the Iran deal, and together with Germany and the United Kingdom, has continued to support it, even after President Trump’s decision to withdraw.

Such a contradiction in the French stance sums up what is wrong with the current Western order. It claims to fight illiberalism, but then rushes in to forge deals with an illiberal Islamist regime. It faces threats from terrorism, but is willing to sign business agreements with those who worship and glorify death.

There are different types of illiberalism in the Middle East, but the worst is Islamist illiberalism. Political Islam, with its Sunni and Shia branches, is a dark, deeply regressive ideology that claims to provide an alternative to Western modernity. Islamists, however, prefer to preach the harsh version of their ideology to their local audience, and opt to address their Western audience in a different tune.

For years, I have watched certain Islamists trying to portray their ideology as benign and compatible with Western values. Iranians, in particular, have excelled at such an approach. They exploited the rise of ISIS, a predominantly Sunni radical group, to portray Iran-backed militias as counter-terrorism groups. That was a big fat lie.

In reality, both sub-branches of Islamism share many common beliefs. Moreover, there is no difference in savagery between radical Sunni and radical Shia groups. The only difference, however, is that the Shia groups are directly under the control of the Iran Revolutionary Guard, a force that funds and trains radicals, and channels their savagery, away from Western eyes, in their imperial grounds, particularly in Iraq and Syria. On the other hand, Sunni radicals are much more diverse, and have managed to metastasize in various Western countries.

On February 1, 1979, Iran’s Ayatollah Khomeini flew from France to Iran in a chartered Air France Flight 4721. His grim face and black attire summed up the fate of the region in the years to follow. And his rule in Iran triggered a nasty trail of  black, bleak, and beyond. His predecessors did not moderate. In fact, they ruthlessly crushed two rebellions in Iran and supported Assad’s barbarism in Syria, while playing doves versus hawks to Western audiences

Liberalism does not mean cherry picking between various Islamist brands. It also does not mean taking the middle ground between Islamist and non-Islamist Muslims. Liberalism is about standing for Western values against those who undermine them, because political Islamists are not, and will never be, friends to the West. Moreover, liberal forces should not empower any branch of Islamism over the other. Such empowerment can only trigger a ruthless competition that will lead to more savagery and bloodshed in an already volatile Middle East

I do not advocate a regime change in Iran, and I certainly don’t support a nuclear war in the region. But let’s be clear, the Iranian regime has had no intention of coupling the abandonment of its nuclear program with an abandonment of its aggressive Islamist transnational ideology. Therefore, supporters of the Iran deal need to acknowledge that their initial hope for Iranian moderation has just been wishful thinking. Such acknowledgement would be the first step to get out of the current crisis and plan for a better future, free from whitewashing Islamism.

Doctor, blogger and Commentator on Middle East issues. The only practising doctor who write in Middle Eastern politics in UK.
View all posts by nervana111 →
This entry was posted in Iran, Middle East, Terrorism and tagged #Iran, IranDeal, Macron, Trump. Bookmark the permalink.