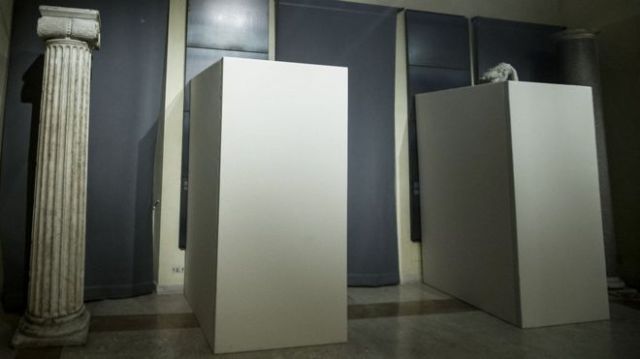 Plywood boxes concealed the nude statues at the museum in Rome

Iranian President Rouhani is in Europe seeking to boost economic ties after the implementation of the Iran deal and the lifting of sanctions on his country. In Italy, Renaissance art of nude men and women were covered up to avoid any possible offence to the Iranian President during his visit to the Musei Capitolini (Capitoline Museums) while accompanied by Italian Prime Minister Matteo Renzi.

Not surprisingly, the decision has stirred anger inside Italy, where politicians on the left and right have both said that Renzi “surrendered” Italy’s cultural identity by hiding the nude statues. Many on social media expressed their dismay about the Italian decision and a hashtag appeared on twitter, #Statuenude, mocking the situation. Facebook page Journalism is not a crime wrote: “Italian officials showed their respect for the visiting Iranian president Hassan Rouhani by covering up classic works of art in the Capitoline Museum in Rome. Meanwhile in Iran, the government executes dozens of people in public or publicly administers lashes as punishment. But none of this seems to bother the Iranian president as much as the sight of a penis or a breast made of stone.”

This is not the first time, however, that this has happened. Italian PM Renzi met with similar criticism last year when he covered up nude paintings in the renaissance town hall of Florence, the city where he used to be mayor, on the occasion of a visit by the crown prince of the United Arab Emirates.

Should a sovereign non-Muslim nation sacrifice its historical legacy to please foreign dignitaries? The answer is simply no. There should be a line of demarcation between hospitality and cultural appeasement. It is alarming that the Italian PM fails to understand the difference, and how his seemingly benign gesture has more troubling implications. Does the Italian PM understand that his gesture will be interpreted in Iran and among other Islamist groups as the West bowing down to them and their beliefs? How can Italy or other Western nations expect Iran to be a partner against ISIS, while Iran shares a basic common value with ISIS____ the rejection of art and Western values?

The question of nudity and Islamism is not new in the Middle East. Western observers fail to understand that rejection of Western arts is an essential pillar of political Islam, whether Sunni or Shia. For the Islamists, rejecting nudity is crucial to their identity and their quest for empowerment. To do this, they reject Western modernity, particularly the Renaissance era.

I learned from very early days in my secondary school how Islamists despised Italian renaissance art. A slide show of photos from “Michelangelo & Sistine chapel” in a history lesson was enough to stir the anger of Islamist students who shouted against the teacher and the presentation, cursing “this Angelo” “who will go to hell.”

In another example, the Mermaid statue in Alexandria, constructed by my uncle Fathi Mahmoud, depicting a Greek God in the form of a bull hugging a beautiful mermaid as symbol of Mediterranean Alexandria and its Greek heritage, is one example of piece of artwork that is considered by Islamists as offensive nudity, prompting some Egyptian Salafis to temporarily cover it up during their election campaign in 2012. Later, in the same year, it was vandalized by “unknown assailants.” Moreover, during Morsi’s tenure in Egypt, Salafi Nour Party M.P. Gamal Hamed called for the abolition of ballet performances in Egypt, describing it as “immoral” and a form of “nude art.”

Nonetheless, in Egypt, at least up till now, it has been unthinkable to hide statues of semi-nude Pharaonic women to please visiting Arab or Muslim leaders. Although Egyptian statues do not depict a person’s genitals, there are many semi-nude Pharaonic women statues that would certainly offend some. The unwritten practice in Egypt is as follows, if anyone is unhappy about Egypt’s ancient monuments, then a visit to the ancient sites should not be included in their visiting programme.

That is precisely what the Italian president should have done. If the Capitoline Museum is too much for the sensitivities of Rouhani, then he should not visit it. For example, in France, Rouhani is expected to attend a dinner for Iranian expatriates in Paris, but a lunch reception at the palace, which is usual for state visits, is unlikely to take place because of Iran’s insistence on a longstanding diplomatic protocol that its officials should not participate in events where wine is served _____ a fair enough mutual arrangement.

Yes, while Iran is a lucrative emerging market, and many countries are keen to strike deals with it, it is baffling to see Western nations bending over to please the Iranian Mullahs. Italy could have easily welcomed the Iranian President, clinched the business deals, and done so without going too far in empowering a medieval ideology that rejects Western modernity.

Sadly, it opted not to do so and instead, decided to give the Islamists more legitimacy in their argument to destroy art. After all, if the birthplace of the Roman Empire is hiding its statues, as if they are shameful or improper, why should others respect them or take notice? Empowering medieval ideologies is Europe’s latest error of judgment and there will be a hefty price to pay down the road.