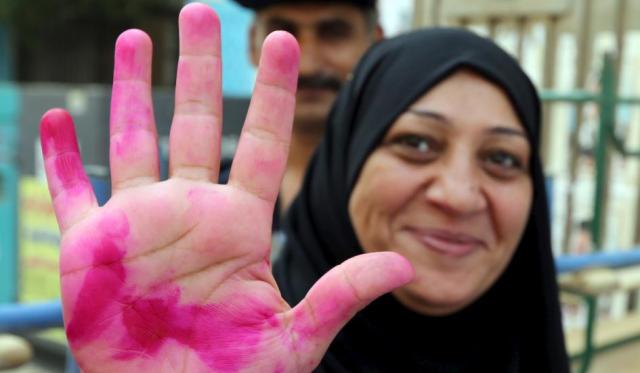 A woman shows the ink on her hand after voting during the first phase of the parliamentary elections at a polling station in Giza governorate, Egypt, via Reuters.

#Egypt's 2011 parliamentary elections. When people have hope, then not even thunderstorms will stop them from voting pic.twitter.com/nwNVfwemjX

The Arab League sent election monitors to Egypt to ensure that the vote is not free or fair. There are traditions to be maintained.

While I haven't been to all 18,945 polling stations, it's the lowest turnout I've seen since the 2011 revolution. #EgyElex #Egypt

I do not need a crystal ball to predict Monday's headlines on #Egypt: "low turn-out in Egypt's parliamentary elections"

A weak new parliament is great news for Sisi. He is probably grateful for all the revolutionary boycotters! #Egypt

The main beneficiary of any boycott of #Egypt's election will be Salafi Nour party. Their supporters will not boycott!

We were nominated for the @RBadawi_Award, which honors a Saudi blogger jailed for his dissident blog http://t.co/YgjOOcDlEA

Doctor, blogger and Commentator on Middle East issues. The only practising doctor who write in Middle Eastern politics in UK.
View all posts by nervana111 →
This entry was posted in Diary of Aak, Egypt and tagged Abdel Fatah el-Sisi, Egypt, Egypt's parliamentary elections, Sisi. Bookmark the permalink.