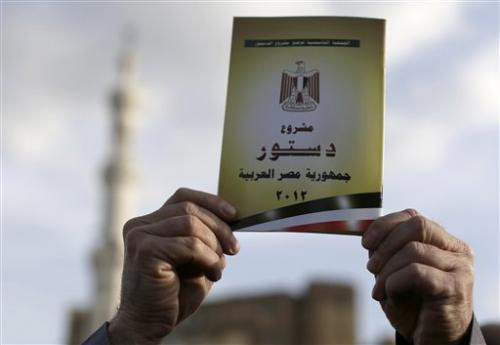 I wrote this piece for Egypt Source, Atlantic Council. Here it is, in case you missed it.

Following weeks of tension and violence over Egypt’s divisive draft constitution, the second round of voting in the referendum is complete. The unofficial results indicate a turnout of approximately 32% with 64 % approval of the draft constitution. The journey for Egypt from January 2011 to December 2012 has been chaotic, but in hindsight it has also served to expose many hidden facts and painful realities.

First, these results are the legacy of a disenfranchised Egypt. The overwhelming support of the referendum in the South Egypt, Fayoum, Red Sea, Sinai, New Valley and Matrouh governorates exposed how these regions were neglected during the Mubarak era. It also reveals how political Islam, particularly Salafism, was a slow growing phenomenon that has now flourished in marginalized communities throughout the country. In these areas ‘religion-as-a-solution’ became an appealing slogan. Appearing first during the previous parliamentary elections, this week’s referendum reflects a continued strength on the ground. Salafists–and not the Brotherhood–are the true victors emerging from this last round of political mayhem, a fact that Egyptians must accept and deal with accordingly.

Second, the voting exposes the real size of the Brotherhood’s influence in Egypt. The results contradict President Morsi’s claim that 80 % of Egyptians support his decisions. In fact, it indicates a drop in his popularity, as only 10 million endorsed the bill in comparison to the 13.2 million that voted for him in the presidential election.  Furthermore, an overall low turnout of 32%, in comparison to 49% in the presidential election, reflects the actual size of Islamist influence throughout Egypt. In actuality, 68% of Egyptians are either not interested or not impressed with the current political dynamics. The turnout may also reflect a return to a Mubarak-era sense of apathy among voters who don’t believe that their vote will make any difference, in the midst of rigging and fraud allegations. This is a bitter pill to swallow for the Brotherhood, who for the last few weeks indignantly told a foreign media that they represent the majority. In actuality, they failed to achieve their 70% target and were endorsed by only 10.5 million Egyptians out of nearly 51 million eligible voters.

Third is the myth of the pro-Shafiq constituency. Many compared the referendum results to the June presidential elections. The valid comparison is when one considers the performance of Islamists as organized political groups, with the referendum indicating a lack of consistency in their performance. The same, however, cannot be said of those who supported Mubarak and his last Prime Minister, Ahmed Shafiq. The pro-Shafiq constituency is not a fixed group with a clear ideology. It includes some loyal members that considered him the right man to lead Egypt. However, it also included many who voted not for a candidate, but for stability. It is likely that they voted ‘yes’ in the referendum for precisely the same reason; a yearning for a stable environment. The fluid dynamics in Egypt will always produce leaders, alliances and parties that may or may not sustain the test of time. Shafiq is just one example.

Fourth, the National Salvation Front’s performance must be considered. The coalition of opposition parties that was formed in haste as a response to President Morsi’s recent edict has proven to be weak, fractious and lacking a common vision for the future. They failed to capitalize on their modest achievement in the first round of the referendum (only 56% voted yes), failed to appreciate the degree of protest fatigue in Egypt, and could not come up with a cohesive plan to manage the ‘no’ campaign in the second round of voting. Their survival as a united front is also now in question, despite today’s announcement of plans to form a single political party. The next parliamentary election is crucial for non-Islamists, especially if they really want to survive in Egypt’s ruthless political environment. Their performance in the constitutional referendum is simply one misstep in a long trail of less than perfect decisions, and they are often reactive rather than proactive in their performance in post-revolution elections and referenda. This should serve as a wake–up call and highlight the importance of unity. The results also reflect their poor performance in rural areas, a far cry from their forefathers’ performance in the 1919 revolution, which enjoyed strong rural support. Galvanizing farmer and worker votes against the draft constitution could have, in fact, proved to be a more successful strategy for the opposition.

The Islamists “pyrrhic war” against their opposing camp may have resulted in a victory. However, this victory is hollow, and is tarnished by reports of many violations and voting irregularities. They turned a battle about the constitution into a confrontation of piety, using religiously charged slogans to gain support. However, with the voter turnout, it is possible that 68% of Egyptians eligible to vote, many likely conservative, did not buy into the religious rhetoric. In contrast, the loyal Islamist camp has voted for stability and out of an extreme desire to end their disfranchised status. This is a huge task for the Brotherhood to achieve, particularly, after alienating many middle-class Egyptians who would be instrumental in achieving that task.

President Morsi and the Brotherhood’s shock-and-awe approach to politics has divided Egypt and reinforced the right wing-puritan Salafis, a move that the Brotherhood may come to regret in the next parliamentary election. It also exposed their true influence within society, and the real map of political forces that was pushed underground during the Mubarak era.

Going forward, Egypt’s political path should be based on facts and not myths. This would be a positive outcome, particularly after a hefty price paid in a chaotic environment. This environment will not be quickly healed and the violence and polarization will not fade in the near future, but at least this referendum has purged many underground myths, a vital step for the evolving democratic process in Egypt.

Doctor, blogger and Commentator on Middle East issues. The only practising doctor who write in Middle Eastern politics in UK.
View all posts by nervana111 →
This entry was posted in Egypt, Politics and tagged Constitution, Egypt, middle-east, Morsi, politics. Bookmark the permalink.