The Era of Sadat 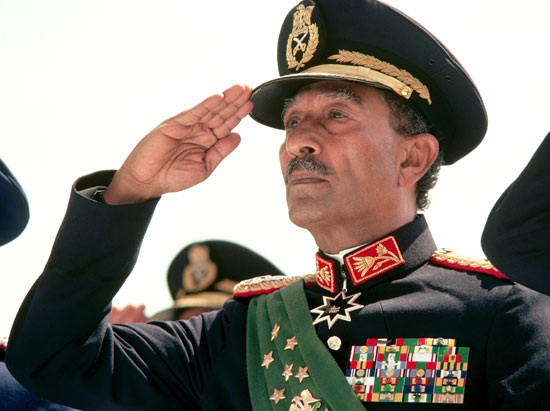 Jerusalem, 20th of November, 1977:  After prayers at the Al Aqsa mosque in Jerusalem and visits to the Church of the Holy Sepulchre, Egyptian President Sadat addressed a special session of the Knesset. President Sadat spoke in Arabic: “If God Almighty has made it my fate to assume the responsibility on behalf of the Egyptian People and to share in the fate-determining responsibility of the Arab Nation and the Palestinian People, the main duty dictated by this responsibility is to exhaust all and every means in a bid to save my Egyptian Arab People and the entire Arab Nation the horrors of new, shocking and destructive wars, the dimensions of which are foreseen by no other than God himself.”

Sadat belonged to a different era, the era of monochromic politics, when men fought in wars but had the courage to seek peace. It was an era when war had clear objectives, and more importantly, a clear end-point—when leaders took responsibility when defeated and worked harder to earn victory.

Following the tragic death of Sadat, the region began to catch up with more colorful politics, yet the colors were not bright and certainly not peaceful. The Middle East excelled in inventing endless shades of grey. Militant organisations took charge and transformed battles into more dirty fights with open-ended outcome. Resistance became victory and hiding somehow became honorable.

For its part, Israel started to indulge its air power and abuse it accordingly. Why not, if it saves the lives of its soldiers? Never mind if innocent civilians lost their lives as a result.  The narratives have gradually transformed into teasing Israel, provoking escalation, followed by air strikes, civilian casualties, limited ground operation, and then, at the end, a ceasefire. The militant goes home boasting of their defiance while Israeli officials claim they “deterred” their enemies.  Still, another round of hostilities will flare up at a later date, depending on regional dynamics.

The current Gaza war is one example; not just of the futility of the whole episode but of the predictability of it. Now, the Palestinians know exactly how the Israelis will respond: through a series of target assassinations and air strikes that initially began restrained, then gradually become wild, with higher civilian death toll. A ground operation may or may not happen but it would always be limited. They can also predict how it would be conducted: Israeli forces would infiltrate Gaza from the North and the middle of the impoverished strip, and then camp at previous Jewish settlements in the Gaza strip and start to bulldoze housed and destroy tunnels while trying to minimize casualties and avoid the kidnapping of their soldiers without a clear end-point. Just a staged operation until ceasefire agreed. The military established are ruled by weak politicians pursuing cheap glory. In this round, Netanyahu’s behavior is no different than that of Olmert. The king of Israel in his first war has offered nothing authentic or new.

Confrontations have become increasingly like a reproduction of the same movie with different cast, but with the same script. Frankly, it has become boring, disgusting and nauseating—a lose-lose situation. Israel lost its ability to surprise or impress, while Arabs have begun to enjoy their victimhood and consider as an asset.

There was something deeply unsettling in watching the Hamas leader Khalid Meshaal (in a Cairo press conference) claiming defiance and victory, while innocents are still been targeted by Israel. He did not even ask for a minute silence to honor the victims. As for his military commands, they are releasing video claiming defiance while hiding their face (clearly to avoid being assassinated by Israel). What kind of defiance is that?

The Middle East is currently the land of no hope and no glory. It is the land of warlords and fake kings. The Arab springs have changed the dynamics but did not change the mindsets.  Many rightly want to support Gaza, yet very few are willing to criticise Hamas’ tactics and exploitation of the Gaza population. The only mental games around are old-fashioned deterrence versus old-fashioned populism. No wonder the painful saga never ends.

Sadat always claimed that the 1973 war (Yum Kippur) between Egypt and Israel would be the last war in the region. In a way, he was right; it was the last honorable war in the region when soldiers died while fighting like men, not hiding like boys. In watching Gaza now—the rockets and airstrikes, both meaningless, both reckless—I cannot help but to miss Sadat’s era so much.

Doctor, blogger and Commentator on Middle East issues. The only practising doctor who write in Middle Eastern politics in UK.
View all posts by nervana111 →
This entry was posted in Egypt, Gaza, Israel and tagged Egypt, Gaza, Hamas, Israel, middle-east, Sadat. Bookmark the permalink.

5 Responses to The Era of Sadat