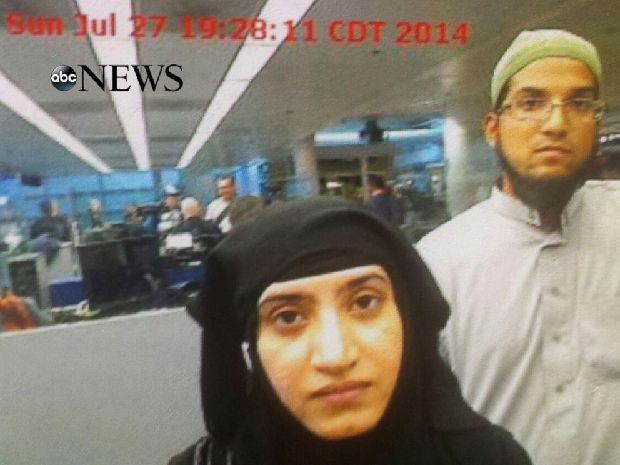 Photograph of Syed Farook and Tashfeen Malik- via  Breitbart.com

The horrific massacre in San Bernardino, California, that killed 14 people and wounded 21, has now been officially labeled as a terrorism investigation. The New York Times (NYT) Editorial Board appealed to end the gun epidemic in America. The NYT is absolutely right to campaign against the ease of access to guns and weapons in the United States. Nonetheless, linking the chronic debate about gun control with the California terrorist attack is problematic. It is one thing to highlight the clear advantages of gun control; it is another, to portray it as the bare-minimum step that will stop Islamist terrorism. It won’t.

A backlash against the NYT editorial has already started. National Review’s editorial argues that it is shallow and banal. Slate’s chief political correspondent argues that it cracking down on assault weapons and the no-fly list is wrong headed and unhelpful. Moreover, The editor of conservative blog RedState, Erick Erickson felt the editorial was full of holes, proceeded to shoot it full of holes. In his words, he “had seven bullets and made the most of it”.

I am not American, and I certainly have no intention to imbed myself in this domestic gun debate, which is clearly turning ugly. Nonetheless, let me highlight from my perspective outside of the US, and the perspective of many, what seems missing in the debate amongst Americans. There is nothing more entertaining to any Islamist terrorist group than watching the “infidels” bickering with each other.

There is much Islamist literature highlighting how a divided enemy is a defeated enemy. They emphasize how division was the number one factor behind most of the victories in all medieval Caliphates. The news of an intense gun debate in America will be viewed among Isis sympathizers as a sign of immanent victory for the Caliphate. This alone will be used by Isis propagandists on social media to recruit more home-grown Americans to join the group’s radical “Jihad”. Success begets success.

The U.S. public, media and government should be very cognizant that the San Bernardino massacre will be portrayed among Jihadists as the ash that broke the back of America’s veneer of unity, triggering a bitter domestic cultural war that will render the world’s leading super-power into a divided, weak, polarized society easily attacked by radical Islam.

Looking specifically at the San Bernardino case, the Federal Bureau of Investigation uncovered evidence that Mr. Farook communicated with extremists, domestically and abroad a few years ago. One contact was associated with Shabab, the Islamist militant movement in Somalia, and another with the Nusra Front, the wing of Al Qaeda in Syria. In all five cases, the investigations were closed and no charges were filed. Mr. Farook traveled to Saudi Arabia multiple times. In July 2014, he entered the United States from Saudi Arabia with Ms. Malik, who had a Pakistani passport, on a K-1 visa for fiancées. Investigators determined that Ms. Malik had recently pledged allegiance to ISIS on Facebook. The couple also stockpiled ammunition and left pipe bombs at the site of the shooting. The father of San Bernardino suspect told an Italian newspaper that his son expressed support for the Islamic State group and was obsessed with Israel.

Those alarming details are the harder to deal with than the access to weapons. Importantly, the focus should be on how to address scenarios like this, which is something more pertinent to future prevention of similar terrorist attacks.

Advocates of linking gun control with terrorism are very passionate ___ even ideological ___ about the idea. An American friend sent me an angry e-mail stating with unquestionable confidence how the US should not be making it easy for potential terrorists to have access to guns. This argument, albeit sound and convincing, is misleading. Gun control would not stop terrorists from making improvised devices and pipe bombs, which are commonly used by Middle East’s based terrorists, but are illegal to possess and illegal to manufacture in the United States.

What is missing from this theory is the crucial distinction between these assailants in the San Bernardino case, and previous crimes by the so-called “lone wolves.” Mr. Farook, and Ms. Malik were inspired by a completely different ideology that specifically glamorize death. “Infidel” laws and regulations mean absolutely nothing to them. This lack of concern for life emerged with the chilling details about the suspects who callously left behind a 6-month-old daughter. Persons who willing to abandon their own children will not think twice about smuggling weapons to kill others. If guns are banned, terrorists will use knives, arson, poison, or any other possible method to kill their victims, similar to what Isis has been doing to their victims in Iraq and Syria over the last few years.

Again, that is not a plea to keep guns ____ far from it. It’s just a perspective from outside of America, reminding our friends there that their domestic issue with gun control is truly separate from our most complex contemporary challenge_____ terrorism.

Gun control will continue in the near future to be a hotly contested US issue. The Obama administration has advocated it for years, but failed to reach a consensus for the required changes. However, in the world of counter-terrorism, limited access to guns means little in the colossal task of stopping terror. The arms warlords will be happy to step in, and supply wannabe Jihadis in America with their needs if guns are banned.

Although this is something “new” in the US, the unfortunate case of Mr. Farook is not rare. Many in the Middle East, including myself, have witnessed the social mutation of many young men and women from a peaceful Muslim to a radical Islamist that ultimately lead to terrorism and bloodshed.

As such, while fighting a gun epidemic is a noble goal, it should definitely not be portrayed as the holy grail of the US’s counter-terrorism strategy. America has to wake-up to a more awkward reality. The ugly social mutation toward radicalism is now not an exclusive phenomenon for the Middle East, or other failed States of the world. Even rich, affluent societies have educated, un-oppressed, employed youth that can be enticed into joining terror groups. How this happened, why, and how to tackle it without demonizing the local Muslim community is what should be discussed and addressed. The world and America, now more than ever, need to present a unified response to those who want to foment terror.

Doctor, blogger and Commentator on Middle East issues. The only practising doctor who write in Middle Eastern politics in UK.
View all posts by nervana111 →
This entry was posted in Politics, Terrorism and tagged California, Gun Control, ISIS, Islamism, San Bernardino. Bookmark the permalink.