Morsi Condemnation Of Lynchings Not Enough 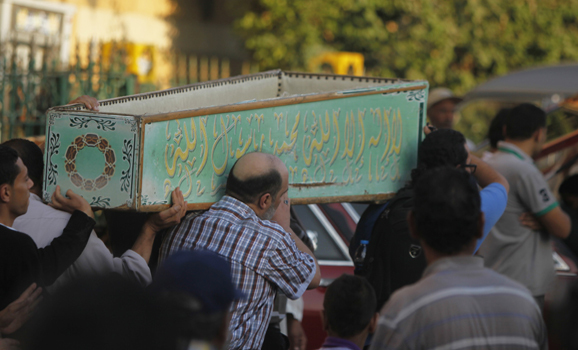 (Egyptians carry the coffin of a Shiite victim, via Reuters)

I wrote this piece for Al-Monitor

My guidebook described it as “the ideal mosque in Las Vegas.” This odd statement motivated me to visit Sayyida Zeinab‘s shrine in southern Damascus. Immediately, I understood what the travel writer meant; the stunning shrine with its golden dome and blue tiles, its spectacular design and elaborate architecture and the happy, animated crowd were simply overwhelming. Yes, it was like a pious version of what we might find in Las Vegas, minus the black garments and religious services. Shiites are always elaborate in their happiness as well as in their sadness; their attitudes, mosques, core theology and historical narrative differentiate them from their fellow Sunnis. These differences are as old as Islam and have fueled a centuries-old conflict that was often bloody and ruthless. Egypt luckily had not experienced what countries like Iraq have endured for years; alas, the barbaric mob attack against Shiites on June 23 — which left four dead in the town of Zawyat Abu Musalam in Giza governorate, south of Cairo — has brought the ugly Shiite-Sunni sectarianism to Egypt in an undisputed way.

My travels to Syria, Lebanon and later to Iran gave me my first introduction to the deep and occasionally hidden tension that has always been part of the Levant. It also brought home to me how ignorant we Egyptians are about Shiite Islam. The successive governments of the most populous Arab nation have never bothered to educate its people about a section of its minority, its history and many historic aspects of its religion. Our history books describe events in a very dry, abstract and carefully phrased way. For example, books accurately describe that Al-Azhar mosque was founded in 970 by Fatimid Caliph Al-Muizz Lideenillah, but neglect to highlight that the highest seat of Sunni religious authority was originally a Shiite place of worship — and it was closed for 10 years by Saladin to wean it from Shiism and reintroduce it as a Sunni university. Such whitewashing of history has nurtured the chronic ignorance that was later exploited and led to the persecution of the Shiites in Egypt. It also gave Egyptians a false sense that they are somehow immune from intersect sectarianism. Continue reading here

Doctor, blogger and Commentator on Middle East issues. The only practising doctor who write in Middle Eastern politics in UK.
View all posts by nervana111 →
This entry was posted in Egypt, Iran and tagged Egypt, Morsi, Muslim Brotherhood, sectarianism, Shia, Shiites. Bookmark the permalink.

5 Responses to Morsi Condemnation Of Lynchings Not Enough