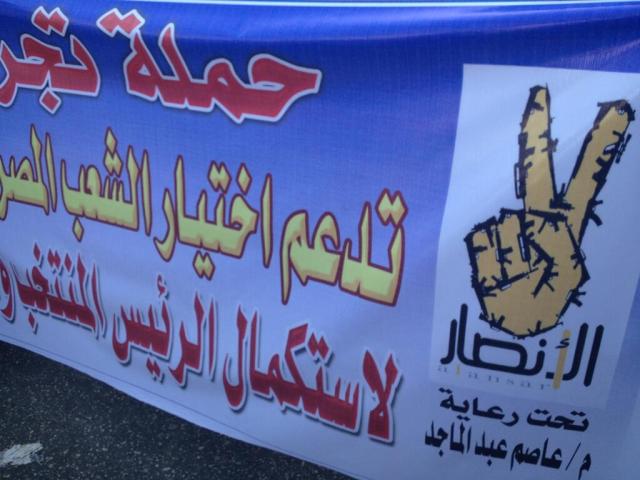 (One of Tagarod’s banners with many Kalashnikovs, via Twitter)

It is a bit tricky translating what Tagarod actually means in English. The campaign launched by Assem Abdel Maged, a member of the Al-Gamaa Al-Islamiya in support of the Egyptian President Morsi, to keep the “legitimately elected president in his post,” has a very intriguing title.

Some translated Tagarod as impartiality, while others claim it is self-abnegation or self-sacrifice in support of “legitimacy.”  In reality it is a tit-for-tat move to counter the Tamarod (Rebel) campaign that was started by a youth group opposed to President Morsi’s presidency last April.  Therefore, T for Tamarod is opposed to T for Tagarod. The true meaning of the term does not really matter; however, reflecting on the name reveals the problematic nature of such a movement.

The organizer of Tagarod, Al-Gamaa- Al-Islamyia, which is still considered a terrorist organization in Europe and the United States, has fought a long insurgency against the Egyptian government since the late president Sadat signed the peace treaty with Israel, and has continued its violent campaign killing many Egyptians including police officers and even tourists under Mubarak rule. In 1997, the group forged a murky deal with the government that facilitated the release of some cadres from prison. Later, in 2003, more concrete rejections of violence occurred by many of its members including its leader, Nageh Ibrahim. Following the 2011 revolution, the group formed a political party, the Building and Development party, with Aboud and Hany el-Zumor (previously imprisoned for involvement in the assassination of Sadat) as prominent cadres, and the group contested the last parliamentary election, winning 13 seats.

To understand the meaning of Tagarod, it is better to examine the vision of its founders and their understanding of democracy.

First, they believe the president of the state should be the Guardian of Islam (Wali-alAmr), which is in simple terms, the legitimate leader chosen by Muslims to rule the nation of Islam under the terms of conduct outlined by Islamic Sharia.  Therefore, in their eyes, President Morsi (an Islamist) elected by the majority of Egyptians is a legitimate Wali-alAmr, and should not be challenged until the end of his “Islamic contract.”  This is, in their opinion, the 4-year term of his office as a president.

Second, Al-Gamaa al-Islamyia’s democracy is extracted mainly from the Islamic concept of Shura, or consultation. They believe that they are 2-tier Muslims; those blessed by knowledge and wisdom, and those who lack such knowledge, thus should follow and obey. The strict term of Shure means “seeks the opinion of the knowledgeable”; however, this term was stretched by some jurists to justify election participation. Once a leader is endorsed by the knowledgeable and elected by the rest, a contract is forged and it is illegitimate to break or challenge it; therefore, they view labeling the Rebel campaign, Tamarod, as infidels.  They even claimed it resembles the devil’s rebellion against the Almighty.

Third, formally, the group clarified that Jihad is not the same as violence, where Jihad, in their opinion, is an exclusive term used to fight only external non-Muslim enemies. However, they later stretched the term to include the allowance of fighting against Assad’s regime in Syria and even vigilante groups in Egyptian provinces that sanction lynching of alleged thieves and murderers without proper trial.

In short, according to Al-Gamaa–Al-Islamyia, Islamist’s democracy should comes with caveats; freedom should be capped under Sharia ceiling, Islamic rules should dominate despite the objection of some, and democracy is merely a majoritarian exercise, provided it is the “right” majority.  Interestingly, the Muslim Brotherhood who have always maintained its moderation and full acceptance of democracy has opted to ally with the Gamaa Islamyia; president Morsi has appointed one of its members to be the governor of Luxor, the same city that endured a massive blood bath against Western tourists in 1997 committed allegedly by the same group.

Tagarod’s Friday rally has exposed their problematic and alarming attitude: On one hand they raised the slogan “no to violence,” however, their banners were full of guns. Their practice of martial arts exercises before the rally, and the emotional incitement against their opponents did not necessarily aspire peace or democracy. Furthermore, their demands are hardly political, rather an expression of an identity issue, wanting to conform Egypt under a very strict religious identity, which is even disputed by many religious scholars including Al-Azhar who earlier released a statement sanctioning anti-Morsi peaceful demonstrations. They are also the masters of victimhood; in addition to a relentless expression of grievances by the Gamaa –Islamyia cadres against Western Imperialism as the sole reason behind the weakness of the Muslim nations, they claim that the Brotherhood current rule in Egypt was never given a proper chance to govern. Such a lack of self-criticism is partly responsible for the wide gap between Tamarod and Tagarod; Tamarod holds Morsi responsible for his poor leadership, while Tagarod portrays him as a victim of a web of conspiracies.

In the Arabic language, Tagarod originates from the verb “Yatagarad or to strip.”  That is, in a nutshell, the perfect description of this group, they are the strippers of Islam, who want to rip its deep philosophy and faith off and leave a superficial neo-interpretation of its historical events. Politically, they also strip people from their legitimate rights to hold their leader responsible of his failed policies. Tagarod’s rally has affirmed why many in Egypt oppose the rule of President Morsi; Egyptians (including many Islamists) did not vote for black flags, Kalashnikov as a logo, demonization of political opponents, twisted Sharia interpretations or victimhood as a justification of failure.

Doctor, blogger and Commentator on Middle East issues. The only practising doctor who write in Middle Eastern politics in UK.
View all posts by nervana111 →
This entry was posted in Egypt and tagged Egypt, Gamaa Islamyia, June21, Morsi, politics, Tagarod, Tamarod. Bookmark the permalink.

6 Responses to Tagarod – The pro-Morsi Campaign