The Tragedy of Alexandria’s Book Market 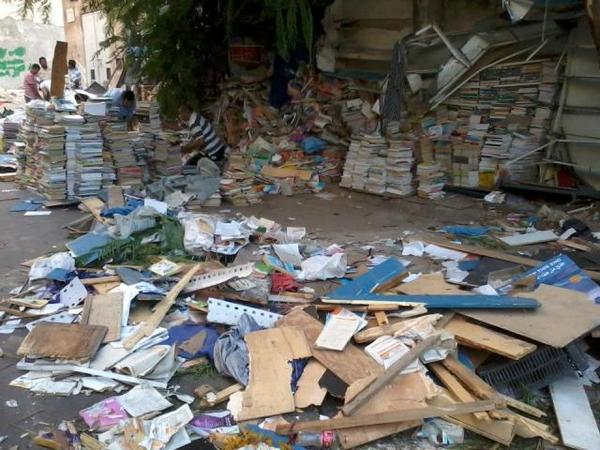 For the second time in the same week, I am addressing the subject of Nabi Daniel Street in Alexandria, first discussed its famous synagogue, and now I wish to write about its book market. As part of the cultural heritage of Egypt’s second largest city, this street was the subject of a vicious—and frankly barbaric—assault from the new Islamist governor. The Alexandria security service chose the early hours of Friday morning to carry out its assault on the old book market. The attackers did it in style, too; they destroyed the kiosks and threw the books savagely into piles of rubble in the street and then left without even providing an explanation to the distraught owners who depend solely on these kiosks to earn a living.

Incidents such as this remind me of several encounters during my childhood, one with the bearded man who advised my mother not to let her daughter read Western literature, as such books could be “corruptive,” and another with the guy who burned Ihsan Abdel Quddous’s novels because he viewed them as a “bad influence” on his sister. Then, during a recent incident, the book—a short history of modern Egypt—which I bought as a present for a teenage girl, was later returned by her mother, who expressed that the book was “not portraying Islamic history in the right way.”

For decades, books have lost their charm and appeal in Egypt and became considered a luxury that many cannot afford. Books on shelves that were once an essential part of any middle class family home were sold, mostly to bookstalls (like the one on Nabi Daniel Street), to allow room for extra bedrooms or lounge spaces or worse, were considered a threat to be avoided or even destroyed. The story of Nabi Daniel’s destroyed bookstalls involved many subtle yet crucial changes that have transformed Egyptian society over the last six decades from a nation of book lovers (even among the illiterates who respected books and wished they could read) to a polarized nation of either satellite TV fans or zealous opposers of both (books and other media), despite our shameful literacy rate of 66%.

However, there was still a minority that loved books, either posh elites who could afford expensive books or others who loved reading but could not afford to buy new books (like me). For the latter group, bookstalls in Cairo’s Azbakeya book market and Nabi Daniel in Alexandria were invaluable. My mother—who used to eat only once a day in order to afford to feed me three meals a day— encouraged me to develop a love for reading and to seek knowledge. She regularly took me to these stalls to buy wide varieties of books at a fraction of their original price. Old magazines had a market too; many families earned a living by buying old editions of fashion magazines and then designing and making low quality dresses to sell for a fraction of their regular price. Today, these customers have lost one of the few outlets through which they could obtain what they need. Not to mention the suffering of the owners of these stalls, whose source of living is simply destroyed by these destructive acts, acts that even a dictator like Mubarak has never dared to perform.

Recently, the disdain toward books has transformed to an active campaign of destruction, from Sufi shrines and libraries in Libya to Nabi Daniel in Alexandria. Rather than focusing on deteriorating security, pollution, and illegal building, the newly appointed governor choses to start his rule with assaults on the poor and their only access to knowledge. It seems that short-sightedness is not only a medical condition, but it can also be a political mindset.

It is no secret that there is no admiration for certain books among many Islamists, from works of major philosophy, history books, western literature, to romantic novels.  For them, it can corrupt the mind of Muslims and distract them from pursuing religious studies. However, very few of them have actually bothered to write about what they dislike about western literature, and the few who did wrote very superficial, reactionary accounts that are not even worth reading.

From Naguib Mahfouz to Salman Rushdie, I have yet to found a well-written book to counter Rushdie’s claim or articulate what exactly is anti-Islamic about Mahfouz literature. I guess writing is by far a harder task when you can make the same statement through destruction and assassination attempts. In fact—even better—violence could achieve better results than intellectual discussion, as it terrorizes others and deters them from their quest for knowledge!

However, I prefer to allow the pundits to answer the question of why exactly Islamists hate books. The “experts” in Islam and Islamism who regularly defend illiberal democracy, Morsi’s theocratic tendencies, and his fairy-tale promises should let us know how the destroyed bookstalls fit in with the revolution. Why are these used books perceived as a threat by some? Is it a question of  law and order  (bookstalls permission)  or there are other motives behind what happened?

Our clever pundits, who, thanks to books and literature, have earned various academic degrees and advise think tanks about the Arab world, did not devote even a tweet to the distraught owners of these bookstalls. Perhaps they are too busy dealing with far more pressing issues, such as redefining political terms, in which subtle theocracy is a civil state, backwardness is renaissance, and tyranny of the majority is the desired democracy.  Therefore, and in that context, the destroyed bookstalls are simply irrelevant.

Doctor, blogger and Commentator on Middle East issues. The only practising doctor who write in Middle Eastern politics in UK.
View all posts by nervana111 →
This entry was posted in Egypt and tagged Alexandria, Egypt, Morsy, Muslim Brotherhood. Bookmark the permalink.

13 Responses to The Tragedy of Alexandria’s Book Market