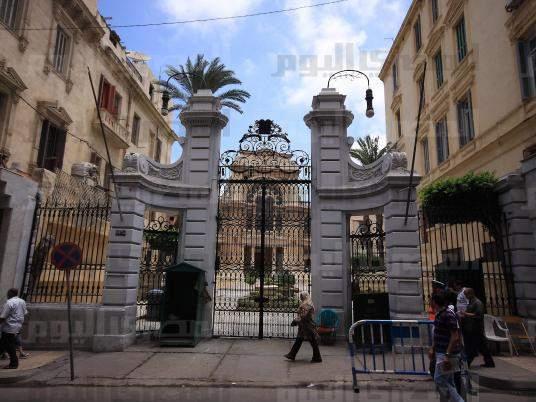 Synagogue—a strange word on the ears of many Egyptians. Many have forgotten—or chose to forget—that Jews have been living in Egypt since biblical times, where they have built synagogues and practiced their religion freely. One of these Synagogues is Eliyahu Hanavi Synagogue on Nabi Daniel Street in Alexandria. Built in 1354, then was later bombed by the French during the Egyptian expedition in 1798 and was re-built again in 1836, during Egypt’s golden time, the era of Muhammad Ali. The founder of Modern Egypt was a man of great vision; he was tolerant toward non-Muslims and abolished the Jizya law (extra-tax imposed on non-Muslims), marking a huge step toward the equality of all Egyptians in a modern civil state. later it was formally abolished in the entire Ottoman empire at 1855.

Currently, this beautiful synagogue is the only practicing synagogue in Egypt and is at risk of being turned into a mere antiquity. There are reports that Egyptian authorities have ordered the cancellation of Jewish New Year and Yom Kippur celebrations due to “security concerns.” The synagogue’s Rabbi Abraham Nino-Dayan told the BBC that there have been reports that several Israelis have already been denied permission to attend the festivals. If this true, it will be the first time since 1836 that the festivals will not take place. On the other hand, a security source has denied that there is has been any order to prevent the celebration in the Alexandrian synagogue.  Like on many other subjects, it is difficult to get the facts right in Egypt these days.

During the Mubarak era, the Egyptian authority used to issue visas to Egyptian Israelis to enable them to visit Egypt during the religious festive season.  Now things have changed, and if I were to venture a guess, I think this is the root of the problem; the authorities are likely reluctant to maintain the same practice.

To the average Egyptian, Jews are those evil people who are continuously “plotting” against them and their country, an image that is systematically reinforced by endless movies, soap operas, and programs deliberately blur the distinction between the Jewish and the Israelis. That is a debate for another time; for now, I just want Egyptians to remember that there are 18 elderly women who are clearly loyal to Egypt and choose to live and die on its soil rather than immigrating to Israel, and for their sake, we Egyptians should do our best to help them enjoy the freedom to practice their religion and celebrate their feast.

It is worth mentioning that the Jewish community in Alexandria has been reduced to 18 ladies and 4 men. According to Jewish religious customs, a viable celebration requires “minyan” (10 men). So without  allowing visiting Jews from outside( yes from Israel), it would be difficult to conduct an orthodox religious ceremony.

Rosh Hashanah, the Jewish New Year, is one of the most important religious holidays for the Jews. Let’s not deny these tiny community a “proper” religious practice  in the last working synagogue in Egypt; is that too much to ask?

One last request, please don’t bring Israel, Palestine and politics into this. Please!

It is my understanding that Muhammed Ali has abolished the Jizya. However, others have pointed out that it was formally abolished during the ruling of his Saed Pasha  like the rest of ottoman empire in 1855.

Doctor, blogger and Commentator on Middle East issues. The only practising doctor who write in Middle Eastern politics in UK.
View all posts by nervana111 →
This entry was posted in Egypt, Israel and tagged Egypt, Israel, Jews, Rosh Hashanah. Bookmark the permalink.