This Angelo will go to Hell

It was just an ordinary day in my secondary school; the history teacher had promised us a surprise presentation about one of the topics within the Curriculum  “Michelangelo & Sistine chapel” to be given by an expert of Italian Renaissance.

The mood was upbeat; all the girls looked happy but sadly it was short lived. Once he started the slide show, you could hear many sighs of disapproval & muttering that got louder. Within few minutes, one of the girls stood up & started shouting,  “This Anglo will go to hell” and stormed out off the room. Apparently The iconic image of the hand of God giving life to Adam was too offensive. “How dare him” she said. The presentation continued but was fast tracked. 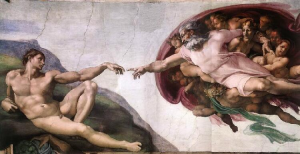 I still vividly remember our heated conversation after. It went as follows (for Abbreviation I will put her name as Y & mine as N).

Y: Islam not just prohibits the depiction of God & prophets but all animated being in painting and drawing, not to mention nudity

N: but this was a history lesson  & has nothing to do with religion does it?

Y: Nervana stop it, you are offending God

N: That is certainly not my intention and you still haven’t answered my question.

Y: Religion guides us on every thing including History.  We shouldn’t learn un- Islamic topics.

This argument was my first introduction to a commonly heard word “Haram” (forbidden) and it became a recurring theme, which has never stopped ever since. A long, endless list   from Art and  music to TV & Cinema, even nail varnish, as far as the radicals are concerned, they are all haram.

Radical Islamic groups are exceptionally good at expressing what they do not like, they keep yelling time after time to reinforce their message. However, when you ask them what they stand for, you only get evasive answers deliberately lacking in clarity, they never  engage in a dialogue; they only argue and lecture in extremely  self-righteous indignation.

Reading Islamic history  convinced me that  my colleagues interpretation of Islam is not necessarily correct, and there is another side of the story. A true civilisation can not survive while rejecting art & music, may be it creates its own version, but a total rejection seems absurd. However, books were not enough ; I wanted a more reliable evidence, and indeed I got it many years after  from an unexpected destination, the Islamic Republic of Iran, to be precise in Esfahan!
The Persian describe Esfahan as” Nesf-e-jahan” (half the world) and at least in my case. Esfahan is full of hidden treasures; one of them is the beautiful palace Chehel Sotun Museum, a feast to the eye with its magnificent, intricate fresco. Also, inside there is a precious mosaic described by many as” the one that survived the Islamic revolution”. My apology for my photographic skill which doesn’t reflect the true beauty of this rare piece.

This semi naked woman with a man kissing her feet surrounded with a mixed group of men and women playing various musical instruments reflect a different side of Islamic culture, vibrant, colourful and diverse. Some may argue that this might be a decedent era in Islamic history. Certainly not, the palace was built during the era of Shah Abbas, one of the greatest rulers of the Safavid dynasty.

Looking at the religious side, Iran also provides different Islamic perspective. The majority of Iranians are Shiites Muslims, and they have an entirely different attitude to art. They are more than happy to portray images of Imam Ali and his family, though they admit that these images may not be a true reflection of him, but they are still  happy to use them.

Below is one example 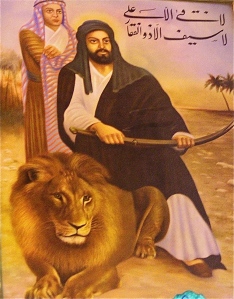 Islam is  not a monolithic religion; there are different cultures within various Muslim communities and certainly different interpretations of the Quranic verses. Sadly some groups are trying to impose their own interpretations as the true and only one, they see the world from a dogmatic prism  (halal or haram). They forget that God didn’t create the world in black and white, but in a vibrant, different colours with  diversity as the basic rule of nature.

These groups are not just a modern phenomenon, but they existed throughout the Middle Eastern history. Perhaps this explain why the History of the Middle East is not linear but goes in circles, a progressive era of enlightenment and prosperity followed by a regressive period of intolerance and stagnation.
Back to Signor Michelangelo; though I missed my first chance to see the impressive collection properly, life was kind to me, (which is not usually the case) and I had a second chance two years ago to see the Sistine Chapel, during a visit to Rome and enjoy this beautiful place. Inside the Chapel, I had  mixed emotions, delighted to see it on one hand, but also sad that some couldn’t appreciate it even from a pure artistic prospective.

Michelangelo did his monumental work within the spirit of his time and religion, and no one has the right to judge him or his work. As for the Almighty, he certainly had 470 years to express his dissatisfaction, if any.

Doctor, blogger and Commentator on Middle East issues. The only practising doctor who write in Middle Eastern politics in UK.
View all posts by nervana111 →
This entry was posted in Uncategorized and tagged Religion. islam. Michelangelo . sistine Chapel. middle East. radical islam. Bookmark the permalink.

8 Responses to This Angelo will go to Hell